Few diversified global players dominate the market holding majority revenue share despite the presence of around 300 competitors comprising a large number of national niche players and some regional players, according to a recent market research on Global Fingerprint Sensor Market by Ken Research

Fingerprint sensor is a category of sensors which are used in fingerprint sensing device for authentication and recognition. These sensors are mainly integrated in a fingerprint detection module and are used for the security of personal computing devices, access and data. Key features of fingerprint sensors include better performance, accuracy and validity based on absolute fingerprint biometric technology.

The fingerprint sensor is widely adopted in smartphones, biometric access control devices, security door locks and other IoT-based devices. Some other applications of fingerprint sensors are voter registration and identification, border control through passport verification, and weapon activation.

A comprehensive competitive analysis conducted during the research study found that the global fingerprint sensor market is highly competitive with more than 300 players which include globally diversified players, regional players as well as a large number of national niche players having their niche on the fingerprint sensor market. Large global players represent around 10% of the number of companies and national niche players represent around 60% of the total number of companies. Most of the niche players in the country operate in providing access control solutions to small and medium enterprises in developing countries, especially in India, China, Philippines, Vietnam and other countries of South Asia.

Detailed comparative analysis of the main competitors available within the research study shows that specialized players such as Fingerprint Cards AB, Egis Technology, Vkansee technology Inc., CMOS Sensor Inc. and Touch Biometrix are highly focused on providing specialized solutions regarding fingerprint sensors and possess advanced techniques that can be used in several vertical sectors. Moreover, several companies and organizations are investing heavily in R&D to increase the development of fingerprint sensor solutions. 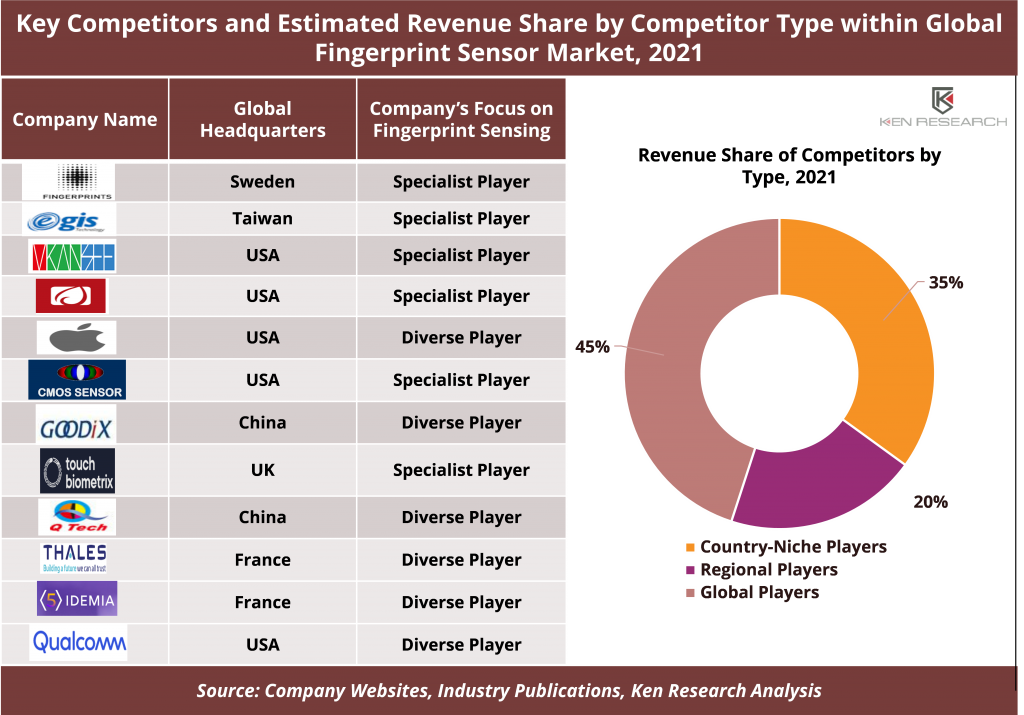 For more information on the research report, refer to the link below:-